In the presentation on bodywork I described how bodywork can be used to change human behaviour and in the presentation on body grip I described how understanding and improving the grip you have on your upper body can help you do things more skilfully. If you haven't seen these then it is a good idea to watch them first. You'll find links in the description below. This presentation focuses on making changes in your face. The face, like the chest consists of complex matrixes of muscle, tendon and bone. There is a greater concentration of tendons in this part of the body than in other parts and the muscles are small and often intertwined. As described in previous presentations the presence of tendons means that the structure of the face remains remarkably stable and consistent over time and that any change only happens gradually.

If you have a lot of facial motility it helps you to express your emotions, get your message across or assert yourself. A large part of inter personal communication is done via facial expressions. In general we prefer watching people who are animated. Television and movie actors are often successful because they know how to express their emotions through their face. These facial movements don't have to be profound; they could be subtle; and the movie director uses them to help tell their story by panning the camera across their face, allowing the audience to better feel the emotions underpinning the story.

In contrast if we attempt to engage with someone who has little or no facial movement they can seem somewhat disturbing. Different psychological disorders come with varying states of inexpressiveness in the face, culminating at the extreme end with catatonia, where there is none at all. 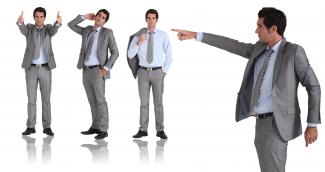 body language; the position of our body; such as facing toward or away, or to the side.

facial expressions; which are displayed on the face.

We shall focus on the last two.

Facial expression. There are three sets of muscles that we can flex relatively independently, the forehead, nose and mouth. Each tends to overlap with the adjacent one and they interrelate in complicated ways. Usually when we converse with someone in person, we also look at them in order to enhance our reception of the message being given or to better state our case. The speaker can transmit mood, concern, doubt, direction, intention; all manner of meanings, through their expression.

Vocal tone. The sound of our voice transmits meaning not necessarily evident in the words spoken. A command spoken forcefully will have more effect than one spoken weakly. A person with a resonant voice will carry more gravitas than one with a constricted voice. Often vocal expression integrates with facial expression in that vocal tone can only be created by holding the face in a particular way.

Have you ever wondered why stage and TV actors are often used as voiceover characters in blockbuster cartoons. It's not just because of their public profile. Actors who are well practised at expressing themselves in front of the camera also make superior voice over actors because the facial expressions they use are matched by an accompanying vocal expression. Although their faces never appear in the cartoon, you can be sure that behind the microphone they are using whatever facial gestures they need to make the character come alive in sound.

If you regularly have difficulty getting your message across to people, it could be due to a small constriction in your expression which affects your voice. Your audience looks at your face and sees conflicting or uncertain messages, along with an unconvincing tone of voice. If this is you, then you might benefit from doing work on facial motility.

The face has more than 40 muscles.  Each of these is attached to the bone of the skull or jaw by tendons at each end. The structure of the face is relatively stable over time, determined, as we have discussed in previous presentations, by the elasticity of the tendons, which always return to their previous dimensions after having been stretched.

This facial structure contributes to vocal tone, pitch and resonance by helping to shape the sound. A resonant pleasant sounding voice is created through a combination of having a good habitual structure and having the right movements as the sound changes. If you have ever studied singing you might be familiar with terms such as lifting the palate, directing the sound through the forehead or raising the upper lip. These all help to change the shape of the acoustic passages and mould the sound.

Changing the configuration of muscle, tendon and bone in the face requires similar technology to obtaining body grip. It requires stretch exercises on the forehead and nose muscles.

Forehead. When you stretch the forehead this is similar to frowning. Forehead muscles are closely involved with the eye muscles; it being very difficult to engage one without the other.  Grab the muscles in your forehead and tighten them as much as possible. If this hurts, then it is possibly because you have reduced motility in them. The only way to change their habitual structure is to frequently and regularly do this exercise.

Nose.  There are a number of different nose muscles. The actual muscles we target here are the muscles behind the nose which can be accessed by lifting your upper lip. These muscles are part of the smile muscles because they should be stretched when you smile. If you smile without using them that may indicate lack of motility there. Try smiling and engage those muscles behind the nose as well as the mouth and push up with the upper lip. If it hurts, then that is sure sign that you have work to do there.

If you want to view more instructional videos on facial motility and expressiveness and other step by step videos on emotional fitness, then do go to http://practice.emotfit.com and sign up.  You may also like to subscribe to the channel here on Youtube.

When I was younger I studied the voice and potential links to emotions and then embarked upon a regime of stretching my facial muscles on a regular basis. Usually I did this at night or when working on my laptop, however sometimes I would do it walking down the street. I found it interesting in the latter situation that often people would greet me because they interpreted my facial expression as one of me attempting to communicate with them. I found that changing my facial motility had an immediate effect on my vocal ability and over many years developed a resonant and tuneful singing voice out of something that was previously quite atonal.

Facial muscles and their physical flexibility and motility play an important role in emotional fitness.  Facial expressions and vocal tone help convey meaning and intent, which not only helps us to coherently feel the emotion we are trying to express, but also helps convey it to other people.  If the other people respond in a manner that confirms our place in society, then that has a corresponding positive effect on us emotionally.

I challenge you to think about the way you currently use your face when experiencing emotion and when communicating with other people. If what I have said about facial motility rings true with you, then I suggest you go out and try it. See if it works for you. What I've learnt about it suggests to me that it underpins many aspects of emotional fitness and that the more we understand about it, both in our collective knowledge and our individual experience, then the benefits it can bring are immense.  If poor facial motility is a characteristic of psychological weakness, then improving facial motility may be a means of prevention and treatment of psychological disorders.  If good facial motility is a characteristic of a well balanced and happy life, then developing it should become a core part of the school curriculum.