In this presentation we discuss anger as an emotion.

Anger has served humans well during evolution, and will continue to do so in the future.  In the quest for resources, humans often fail.  In so doing they become hungry for success.  The hungrier they get the angrier they get.  The anger motivates to keep trying; to focus, endure, refocus, and endure even longer until success happens.  In modern western society businesses compete against each other.  Competition encourages aggression and those who succeed are those who channel their aggression successfully.  We cannot negate anger, nor can we deny it, otherwise it becomes suppressed and it can spring upon us without warning, causing us to do violent and terrible things.

When someone is angry it is their body telling them to do something.  The trouble is people are not always sure what to do.  All of a sudden there is an increased availability of energy to do things with.  It is free energy, and as Johnny Rotten from the 1970s band Sex Pistols once said in a song: “anger gives you energy”.  The secret is how to make that energy work for you. 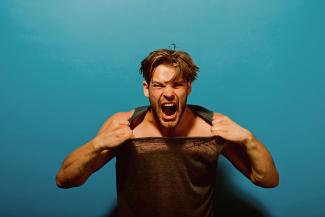 Anger is physiologically detectable.  When we feel anger, adrenaline is secreted and our sympathetic nervous system is activated.  Our body optimises resources in readiness for attack.  An angry person has certain facial markers such as redness in the face, a glare in the eyes, a furrowed brow and pursed lips.  In addition their body rises up and fists might be clenched.  Most people can easily detect anger in another.

If we focus on its excitation of the Parasympathetic system, we can see that anger has a hugely motivational aspect.  All parts of the body are triggered and ready for action.  The result has potential to be a net benefit.

Humans are a naturally aggressive species and coherent use of anger is an important part of our emotional repertoire.  People who are able to successfully channel their anger can lead productive and fulfilling lives.  Those who fail to do so can become troublesome and costly members of society. 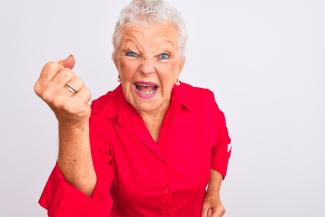 Anger has huge motivational properties that can stimulate people to go out and do things.  Achievement requires a certain level of focus and determination.  Whenever an obstacle is met a flight or fight response might be elicited.  If the flight response is always activated then achievement will never occur.  If the fight response is activated in enough quantity and in the right circumstances, then success is much more likely.  Humans only succeed when they rise up to the challenge.  Rising up is greatly enhanced by the presence of adrenaline driven behaviours.

On the flip side anger often leads to destructive behaviour, which not only prevents achievement but also creates additional negative consequences.  A person who lashes out at their own personal failures and causes injury or death to others, not only fails personal targets but creates distress and damage to society at large.  The destructive consequences of angry behaviour fill each news cycle with stories of murder, revenge, domestic violence and war.  It is the most newsworthy of emotions.

Such expressions of anger may be indeed be coherent and the perpetrator may feel fulfilled in the expression of it but their actions may be judged as socially unacceptable and they may find themselves facing a court of law.  Just because a person can express coherent emotion does not mean that their behaviour is socially fit and proper.

Other problems occur with anger, such as when a person can no longer express it coherently and the emotional energy becomes suppressed.  These people may experience depression or other psychological disorders associated with stored emotion or lack of self-expression such as learned helplessness, where they have learnt through constant exposure that any response they make is futile.

Irrespective of constructive or destructive outcomes, anger has characteristics that make it ideal for processing and channelling.

Anger is free energy.  It provides bountiful and persistent motivation to do things.  Anger can be harnessed and channelled into positive outcomes.  People who habitually use their very coherent anger to destroy their own and other people's opportunities can be taught to use their energy differently and channel it into constructive pursuits.  Sports, business ventures, hobbies, all sorts of things can be used to channel aggressive behaviour.

More specifically, anger is the ideal emotion to channel into improving body grip and facial motility, two areas of human functionality which we discussed in previous presentations.  Once anger is channelled into higher personal functionality, it can then be used to improve career prospects, find love and happiness and more.

If you want to view more detailed presentations on channelling anger and other step by step videos on emotional fitness, then do go to practice.emotfit.com and sign up.  You may also like to subscribe to the channel here on Youtube.

I used to consider myself the angriest person on the planet.  When I got angry I used to channel it into my voice, possibly to the detriment of the neighbours’ peaceful enjoyment of the day.  I used the energy expended to expand my vocal apparatus, which includes the chest and nasal cavities.  Without damaging my voice I would work it hard and long until I was satisfied I could do things I couldn’t previously do.  Now my voice is a lot better than it used to be.

Anger gives you energy, and that energy can be used constructively to channel into improving functionality and constructive pursuits.

If you struggle with outbursts of anger, you should know that it is possible to channel that energy into constructive outcomes. You can unlearn your current poor angry emotion fitness, and direct the emotional energy into positive physiological change. If you do this frequently and regularly you will find that your handling of angry reactions will improve and you will be well down the path to being able to channel anger successfully.